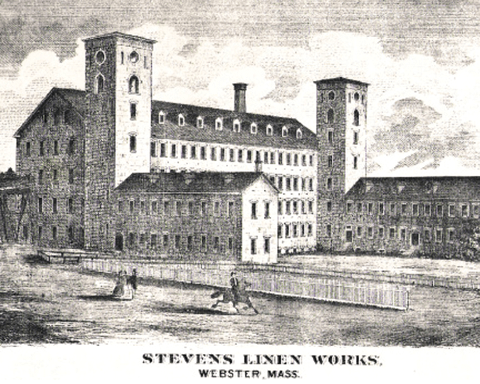 Stevens Linen traces its history back to 1846 when Henry Hale Stevens purchased the unprosperous Merino Woolen Mill, founded in 1812, and began the manufacture of linen goods on machinery imported from Ireland. It was then the first and only integrated linen mill. From imported Russian flax, the processes of hackling, carding, spinning, weaving and bleaching produced the finished, fully-hemmed homeowner's linen towel. ?At one time, a field near the mill was prepared for experimenting with American-grown flax, but the quality of the crop was not equal to the imported flax we currently use.

In the early 1950s, demands for more versatile products led to diversification. Wide looms were installed for the manufacture of drapery and upholstery fabrics and a hand screen printing system was devised to beautify linen. In 1953, the idea of the calendar towel was born, with the first towels bearing the year 1954.

With our operations located in New Hampshire, Logo Loc Inc., is committed to continuing the tradition of printing the same high quality prints you have come to expect. We look forward to working with you to have these fine products in homes across America.